Dreaming about a new bike? GSR have an amazing ran

Oh what a feeling! Katrina & Bridget LOVED their r

Where is @hilde.hinton hair hiding? Autumn 🍂 re

Weather forecast for the weekend = perfect for a r

Get the Girl Gang together for a ride and sneaky c

The fabulous Emer with her gorgeous new Milano+ Lo

Thanks Wendy & Gavin, thrilled that you are enjoyi

The KEISER Crew are back! GSR enjoy our corporate

Wonderful group of riders. Well done, two made the

The Great Southern Railway took five years to build and opened in 1892. It initially joined Dandenong to Port Albert and was later extended to Yarram and Woodside; there were also branch-lines to Outtrim and Wonthaggi.

The last train ran to Yarram in 1987 and the last train beyond Leongatha ran in 1992. The line from Cranbourne to Leongatha was closed in 1993. Unfortunately, while several governments looked at reopening the VLine passenger service to Leongatha this did not happened and in 2012 several kilometres or rail were removed at Koo Wee Rup and a short rail trail constructed there.

The first section of the rail trail between Leongatha and Koonwarra opened in 1998 and was gradually extended to Foster. Following the expiration of a 10-year moratorium the rail trail was extended from Foster to Toora, and then on to Welshpool by 2014.

In 2016, the Victorian Government and the South Gippsland Shire Council completed a $1.8m project to “bridge the gap” between Koonwarra and Meeniyan. This picturesque section contains three long timber bridges. 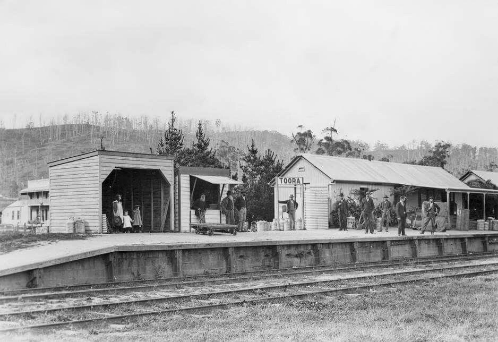